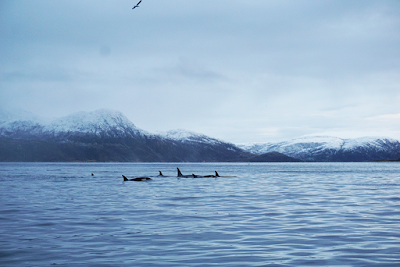 Speeding through the fjords off the coast of Tromsø in Northern Norway, decked out in thermal sea-faring gear (arctic onesies) and goggles, the icy wind rushes past my well-muffled ears. The polar nights are here and the grey half-light of mid-morning blends with the white and ice of the surrounding landscape and the deep grey of the water. As the RIB (rigid inflatable boat) we’re aboard navigates the ocean channels, eyes dart wildly around as everyone onboard focuses and strains to spot the first one – we’ve all come a long way for this.

We’re all here with the hope of seeing orca, or killer whales. We have an early sighting some way off in the distance, but the orca dive down and out of sight – it looks like they’ve gone. Moving further out into the fjords the RIB stops in an open body of water and we spot them again – orcas in the distance are heading our way. Surpassing my fingers-crossed silent wishing, we are quite suddenly surrounded by orcas. There are pods of them in every direction – surfacing, diving, hunting. The herring in the fjords is in bountiful supply and we’ve clearly floated into the all-you-can-eat buffet.

I don’t know where to look first. We’ve all forgotten the cold, the thick mittens have been abandoned, and we all swing our cameras around trying to catch the spectacle. I think I’m squeaking with excitement, or maybe that’s the orcas. Some whales surface close to the RIB, exhaling loudly through their blow holes, and giving us a close-up of their striking markings, as others circle the herring in hunting pods of up to nine whales, all while the marine biologist onboard tells us more about the whales, their behaviours and the environment. I’m half concentrating, half just blown away by what’s in front of me. 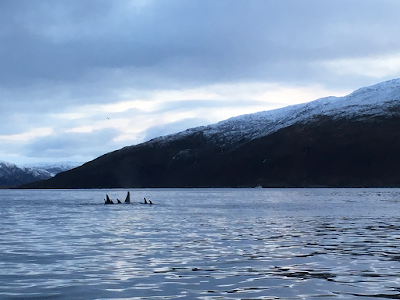 Something is happening. A hush has fallen, then we hear commotion from another boat and there, mere metres in front of us, a humpback whale rises vertically from the freezing water, almost in slow motion, it’s huge barnacled head breaking the surface. The humpbacks have come to the buffet. The whale watching experience has reached a new level. We continue to swivel around in every direction not knowing whether it will be a humpback or orca who steals the show next – and not wanting to miss a second of it. It’s nearing the end of November and we’re told that the humpbacks are migrating through the cold arctic channels on their way to warmer waters, potentially the Caribbean, but have stayed longer this year to carry on feasting. There we stay for some time watching the two species of whale hunt alongside one another, against a surreal wintery backdrop. I don’t want to leave, but even the hot chocolate and delicious cake can’t keep us warm for much longer. Noticing the iciness of the air again, we ride back to base, taking in the scenery before we warm up and review the delights we’ve caught on camera. 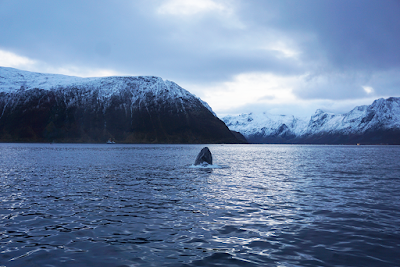 As if a huge gathering of orca and humpback whales isn’t a trump card enough for one country, Norway is also a great spot to spy the northern lights – cue the next Nordic adventure. Bundled into a van and layered up to the eyeballs, myself and a few others begin our aurora exploration. Our guide, and driver, Dan is brilliant and has told us he’ll drive for as long as it takes in order to find the lights – we’re told to bring our passports in case we end up in Finland, so we know we’re on a mission tonight. After a few hours and many phone calls, the van pulls up sharply and we all tumble out into the clear freezing night. Rising above the tree tops is an aurora, white and sphere-shaped, tinged pink with green flares – the aurora rises over our heads, swirling, twisting, morphing, and then disappears as quickly as it arrived. That is not what I expected the northern lights to look like! I hadn’t expected the lights to move so quickly and so wildly… I thought they merely flickered in the sky! We also saw some more ‘what you see in the pictures’ northern lights, appearing in hues of green as though from nowhere, shimmering and flickering in long tails through the sky, then disappearing – each time we saw them it was fascinating. 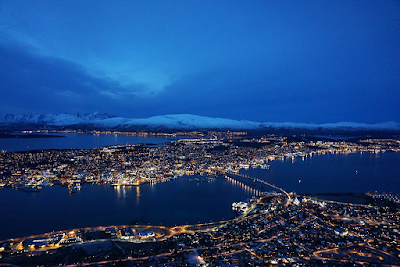 After a few stops and more opportunities to try out our camera’s exposure settings, we set up camp in a woodland area. Dan lit a small campfire to stave off the now -8 temperatures and we watched the lights, fainter to the naked eye, the exposure settings bring out the vibrant greens of the auroras. Again, fuelled with soup, homemade cake (cake clearly keeps out the cold) and hot drinks we set off back to Tromsø, this time through a snow blizzard, exciting and scary for us, the usual for Dan.

Whilst in Tromsø and between the mind-blowing once-in-a-life-time outdoor activities, there are a number of museums, the beautiful Arctic Cathedral and many delicious high-quality restaurants to while away the dark wintery afternoons in. Mathallen serves up great wine and the warming fish stew is perfect for a post-whale watching lunch. Other great restaurants include Emmas Drømmekjøkken where the fish au gratin will put you into a delightfully full and sleepy state, and Fiskekompani for the freshest seafood and the chef’s choice 3-course menu.

If you still want more adventure, wrap up warm and take the Fjellheisen cable car up into the mountains and enjoy the spectacular view back down over Tromsø and the fjords, as darkness draws in and the city lights come on, you’re rewarded with a sea of twinkling lights and potentially the chance to glimpse more auroras. 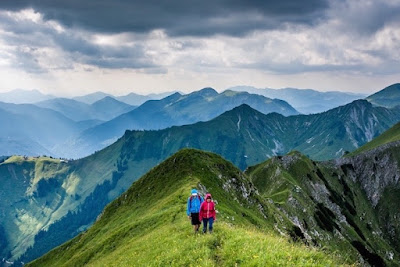